The history of railways in Japan started in the late Edo Period, a time when Japan had been in isolation under the rule of the Tokugawa Shogunate for about 250 years.

However, the development of Japan railways commenced after the downfall of the Shogunate, when the power was transferred to the Meiji Government. 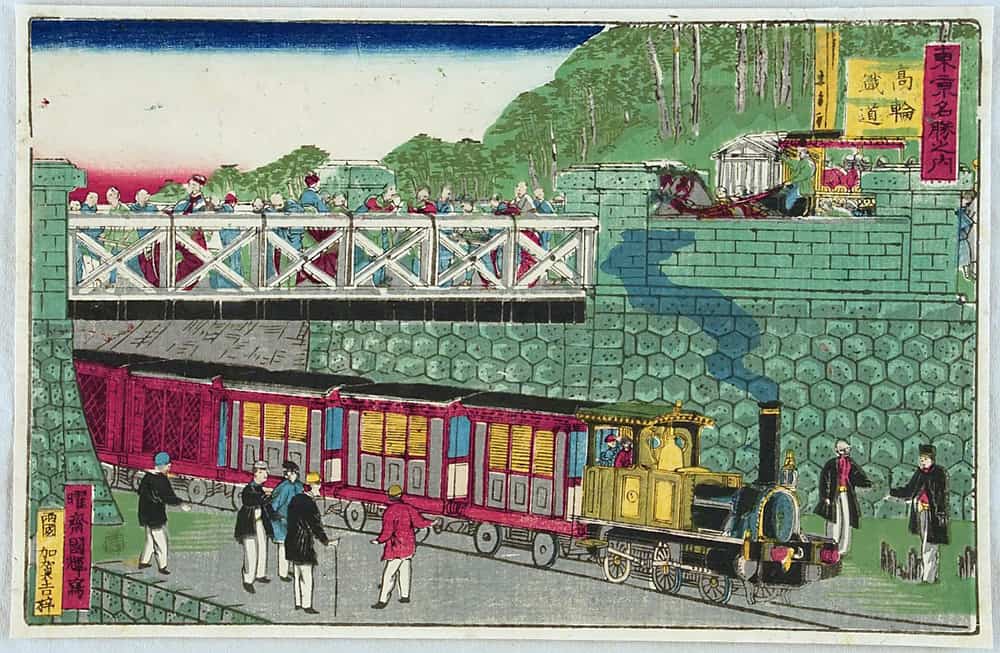 Here are 25 amazing facts about the history of the world’s best railway network. Sit back and enjoy a trip in time to the 1800s of Japan:

The leaders of the Saga Domain from Kyushu made a working model of a train and planned to construct a train line but no railway line ever come to reality before the Meiji Government was established in 1868.

2. The first demonstration of a steam engine

In July 1853, Yevfimiy Putyatin of the Russian navy made the first demonstration of a miniature steam engine to a small audience on his ship off Nagasaki. Among those present was Nakamura Kisuke, who later worked with the renowned inventor Tanaka Hisashige to construct a train model based on what he observed.

3. The United States of America send presents to Japan

In 1864 US Commodore Matthew Perry, invited the Japanese to take a close look at some presents sent by the American representatives. These presents included a “Lilliputian locomotive, car, and tender” and a circular track just over 100 meters long. The Japanese were startled by these presents!

According to Francis L. Hawk, a samurai’s could not repress their joy at seeing Matthew Perry’s train model and jumped on the roof of the train to enjoy a ride. Kawada Hachinosuke described how he observed the vehicle, sketched it, and made notes for further study. He apparently climbed onto the roof to experience the train in motion himself out of a spirit of scientific inquiry.

After the fall of the Shogunate, Japan was pressurized to import technology from foreign countries. So, Japan decided to build a railway from the major port of Yokohama to Tokyo with the help of British and European technical teams but in the presence of Japanese co-workers so that Japan could become self-sufficient in railway construction expertise.

7. The foundation was laid

All the above mentioned engineers trained Japanese engineers to undertake railway projects. Two men trained by Crowford later became presidents of Japan National Railways. A bronze bust of Morel in Yokohama, a bronze statue of Crowford in the Temiya Railway Memorial Museum, and a bust of Rumschottel Hakata commemorate their contributions to Japan’s railways.

8. The Father of Japanese Railways

Inoue Masaru was a member of the Chōshū Five, a group of samurai who went to study in Britain in 1863. Inoue learned Civil Engineering in London and returned in 1868 to his country, where he was appointed head of the Railway Bureau in 1871. He is remembered today as the “Father of the Japanese Railways.”

9. The first railway in Japan

In 1872, the first railway, between Shimbashi (later Shiodome) and Yokohama (present Sakuragichō) opened. A one-way trip took 53 minutes in comparison to 40 minutes for a modern electric train. The service started with nine round trips daily.

Here’s a look inside the Shinkansen!

In 1872, Japan’s first railway line was officially opened. The Emperor himself was present at the inauguration. Japan embraced railway transportation with enthusiasm. In the years that followed, more Japanese cities were connected by train, and locomotives became a symbol of Japan’s modernization.

A track gauge of 3 ft 6 in (1,067 mm) (also known as “Cape gauge”) was used in the first railways but the reason why is uncertain. It seems most likely that Morel’s previous experience of building Cape gauge railways was a significant influence.

In 1886, the construction of what became the Tokaido line was approved. Until the opening of the Tokaido Shinkansen in 1964, this was the most important main line in Japan.

The government was financially strained after the Satsuma Rebellion of 1877, making the expansion of the network terribly slow. Consequently, Nippon Railway was founded as a private entity. With the success of Nippon Railway, other private companies were also founded. San’yō Railway, Kyūshū Railway, Hokkaidō Colliery and Railway, Kansai Railway and Nippon Railway were the “major five private railways” at that time.

The success of Nippon Railway Co. and other private companies led to a Japanese situation similar to the UK Railway Mania. However, in 1891, the failure of a company proposing to build a line from Gotenba to Matsumoto ended the ‘mania’, and the government realized that a more planned approach to the network expansion was required.

15. The Government vs Private Networks

By 1892, the privately owned train network was at 2,124 km compared to the government who owned sections totaling only 887 km. By 1905, 80% of the Japanese railway network was privately owned, and included joint operations such as an overnight sleeper train from Tokyo to Shimonoseki.

16. Railways as Inter-city and Intra-city Transport

Railways were introduced to provide both inter-city and intra-city transport. The first horse car line in Japan was built in Tokyo in 1882 and the first tram was the Kyoto Electric Railway which opened in 1895. Some operators began to use EMUs (electrical multiple unit) rather than locomotives for inter-city transport.

After the First Sino-Japanese War and the Russo-Japanese War, the government planned to directly control the unified railway network system for strategic purposes. In 1906 the Railway Nationalization Act was promulgated, nationalizing many railway lines.

19. The first subway in Japan – The Ginza Line

The first subway was envisioned by a businessman, Noritsuga Hayakawa, who visited London in 1914 and saw the London Underground metro system. He concluded that Tokyo needed its own underground railway and began construction in 1925, after raising 6.2 million yen to fund the project. The Ginza Line finally opened in 1927. The first trolleybus appeared in 1928.

After the start of the Pacific War (World War II), the railways came under military control. During this period there was a second wave of nationalization. Twenty-two railway companies were forcibly acquired by the government in 1943 and 1944. Unlike the first wave in 1906–1907, this wave mainly targeted railways with industrial value. The acquired lines include the Tsurumi Line, the Hanwa Line, and the Iida Line.

The war and especially the strategic bombings by United States damaged the railways heavily. The worst case was in Okinawa, which lost its railways system until the opening of Okinawa Urban Monorail in 2003. In most other cases, railways resumed operations fairly quickly. San’yō Main Line resumed two days after the atomic bomb was dropped on Hiroshima, while Hiroshima Electric Railway resumed three days after.

In 1949, the Japanese Government Railways which had been directly operated by the Ministry of Transport until then, was reorganized as the Japanese National Railway (JNR), a state-owned public corporation. The 1960s saw great improvement in the economy, including in the railways system. The Tōkaidō Shinkansen, the first modern high-speed rail line, opened in 1964. Many limited express trains and overnight trains started to cross the nation, marking the golden age of railways.

The cost of the construction of Shinkansen and other lines further increased debt on the government. To resolve the situation, JNR was privatized in 1987 and separated into seven separate companies known collectively as the Japan Railways Group (JR Group). The JR Pass is a rail pass for overseas visitors to Japan which allows travelers to board almost any train for free.

25. Crimes in the Railways

Some notable crimes staged in railway facilities in Japan include the assassination of the Prime Minister Hara Takashi in Tokyo Station in 1921, the deliberate train wreck at Mitaka Station in 1949, and the Sarin gas attack on the Tokyo subway in 1995.

The Japanese Railways is the best-known railway system in the world due to their punctuality. When trains are delayed for five minutes, the conductor makes an announcement apologizing for the delay and the railway company may provide a “delay certificate”, as no one would expect a train to be this late. Japanese passengers rely heavily on rail transit and take it for granted that trains operate on time. When trains are delayed for an hour or more, it may even appear in the newspaper.